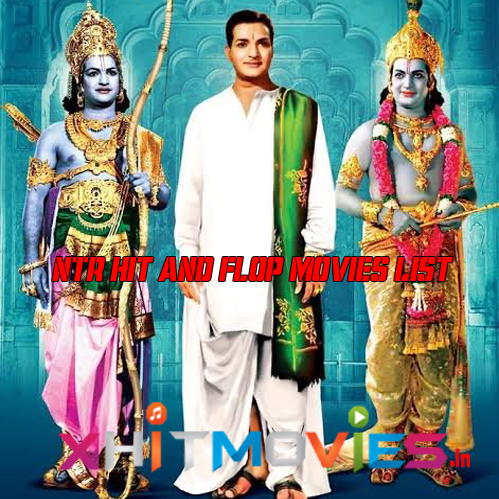 Legendary actor NTR All Hits and Flops. Nandamuri Taraka Rama Rao (28 May 1923 – 18 January 1996), often referred to by his initials NTR, was an Indian actor, filmmaker and politician who served as Chief Minister of Andhra Pradesh for seven years over three terms. He starred in over 300 films, predominantly in Telugu cinema, and was referred to as Viswa Vikhyatha Nata Sarwa Bhouma (transl. World famous emperor of acting). Rao received three National Film Awards for co-producing Thodu Dongalu (1954) and Seetharama Kalyanam (1960) under National Art Theater, Madras, and for directing Varakatnam (1970). Known for his breakthrough performances in Raju Peda (1954) and Lava Kusa (1963), Rao garnered the Nandi Award for Best Actor for Kodalu Diddina Kapuram in 1970, and the Inaugural Filmfare Award for Best Actor – Telugu in 1972 for Badi Panthulu.

Rao made his debut as an actor in a Telugu social film Mana Desam, directed by L. V. Prasad in 1949. He gained popularity in the 1950s when he became well known for his portrayals of Hindu deities, especially Krishna, Karna and Rama, roles which have made him a “messiah of the masses”, and a prominent figure in the history of cinema. He later became known for portraying antagonistic characters and Robin Hood-esque hero characters in films. N. T. R. was voted “Greatest Indian Actor of All Time” in a CNN-IBN national poll conducted in 2013 on the occasion of the Centenary of Indian Cinema.

He starred in such films as Pathala Bhairavi (1951), the only south Indian film screened at the first International Film Festival of India, Malliswari (1951), featured at Peking Film Festival, Beijing, China, the enduring classics Mayabazar (1957) and Nartanasala (1963), featured at the Afro-Asian Film Festival that was held in Jakarta, Indonesia. All the four films were included in CNN-IBN’s list of “100 greatest Indian films of all time”. He co-produced Ummadi Kutumbam, nominated by Film Federation of India as one of its entries to the 1968 Moscow Film Festival. Besides Telugu, he has also acted in a few Tamil films. Widely recognised for his portrayal of mythological characters, Rao was one of the leading method actors of Indian cinema.

Rao was awarded the Padma Shri by the Government of India in 1968, recognizing his contribution to Indian cinema. After his career in films, Rao entered politics. He founded the Telugu Desam Party (TDP) in 1982 and served three tumultuous terms as Chief Minister of Andhra Pradesh between 1983 and 1995. He was known as an advocate of Andhra Pradesh’s distinct cultural identity, distinguishing it from the erstwhile Madras State with which it was often associated. At the national level, he was instrumental in the formation of the National Front, a coalition of non-Congress parties which governed India from 1989 until 1990.

Nandamuri Taraka Rama Rao, also known as NTR, was a legendary Indian actor, director, and politician who appeared in over 300 films in Telugu cinema. He was one of the most popular actors in Telugu cinema and was considered a cultural icon. He had a career spanning several decades, and some of his most popular and critically acclaimed films include:

Flops:
It would be subjective to say which of his movies are flops as his career was long and had many successful films, but some of his movies that did not perform well at the box office or receive negative reviews include:

As for flop movies, it would be hard to say which of his movies are flop, as NTR was one of the biggest and most respected actors in the Telugu film industry, many of his movies were considered big successes. Even though the movies didn’t do well in box office but considered as a classic and very well respected in the industry.

It’s worth noting that NTR’s movies are still considered as cult classics and have a huge following even today, and it would be hard to classify his movies as hits or flops in the traditional sense, as his legacy is a bigger part of Telugu cinema.

It’s worth noting that even flop movies can have a cult following over time and NTR has a huge fan base even to this day, and many of his movies are considered as evergreen classics.